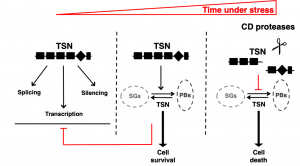 Tudor staphylococcal nuclease (TSN) is an evolutionarily conserved protein involved in transcriptional and post-transcriptional regulation of gene expression in animals. Although TSN was found to be indispensable for normal plant development and stress tolerance, the molecular mechanisms underlying these functions remain elusive. We have found that Arabidopsis thaliana TSN is essential for the integrity and function of cytoplasmic messenger ribonucleoprotein (mRNP) complexes called stress granules (SG), sites of post-transcriptional gene regulation during stress.

Aim 2: Functional study of the molecular role of SG in plants. 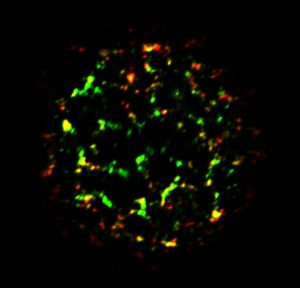 Research on plant SGs is still in its infancy.  Recently, SGs have so far been shown to form under heat, hypoxia and salt stress. Studies in Arabidopsis, maize and tobacco have identified several protein components of plant SGs, most of which are homologues of yeast and/or animal SG RNA-binding proteins and are essential for stress tolerance. The lack of studies on plant SGs is surprising, considering the importance of these mRNP complexes for the cell fate, making it difficult to establish the molecular mechanisms by which these complexes intervene in plant stress resistance.

The main goal of this project is to unravel the molecular function of plant SG in the stress resistance via characterizing the role of some of the SG protein components.